My running journey with Congleton Harriers began in August 2019. Before this I hadn’t ran for 14 years since high school. The only exercise which I was doing at the time, was going to the gym once or twice a week which fitted around my work commitments. However, I wanted to have more of an active social lifestyle and get out to meet new people.

I’d been interested in joining a running club for a while, so I got in touch with Suzie Roscoe who at the time was the new members secretary, and I was invited to come down and give the club a go.

I remember my first club run well; it was a Monday evening run where we ran the short cloud route. The weather was really hot, and I’d shown up in tracksuit bottoms and a t-shirt (should have invested in some shorts earlier haha) It was at this run that I met some really great people who inspired me to achieve my full potential and are now friends for life.

I remember Kelly Hurlstone saying to me I would easily run 10K or even a half marathon....my reaction was something like ”no that’s too far, I can’t do it” but I remember her saying “if you put your mind to it anything is possible” how true those words would become in later years.

After being with the club for a matter of weeks, I entered the Run Macc Fest 5K race. This was one of my very first races wearing the yellow vest. The photo below shows the club members who entered the event. (photo credit: Stephen Canning) 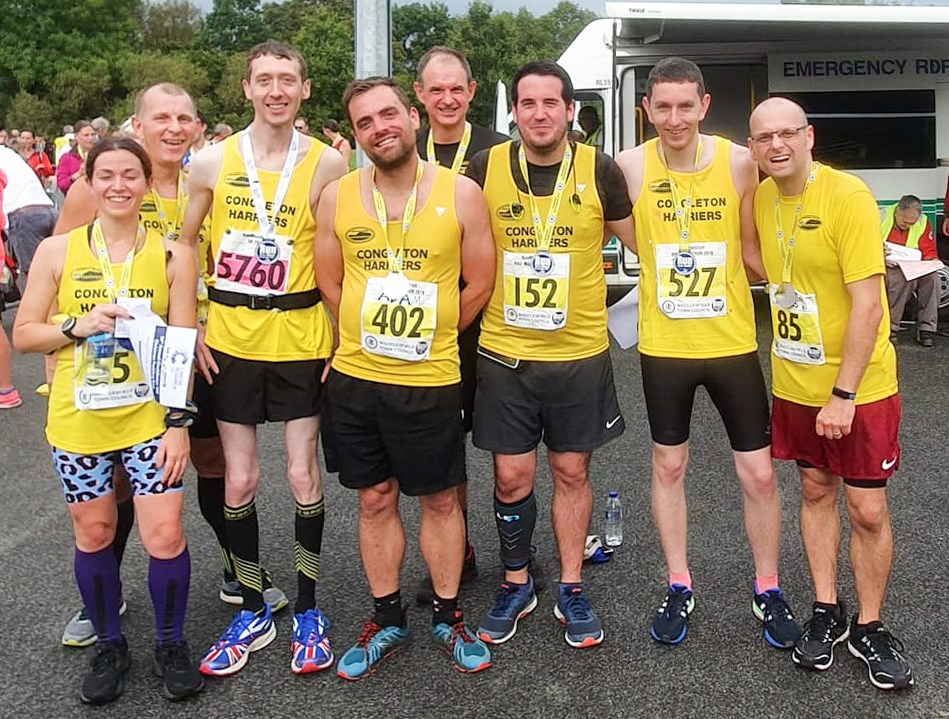 After that I was bitten by the racing bug. The next event for me was the Wilmslow Festive 10K in November 2019, where Kelly pushed me to my first 10K PB. 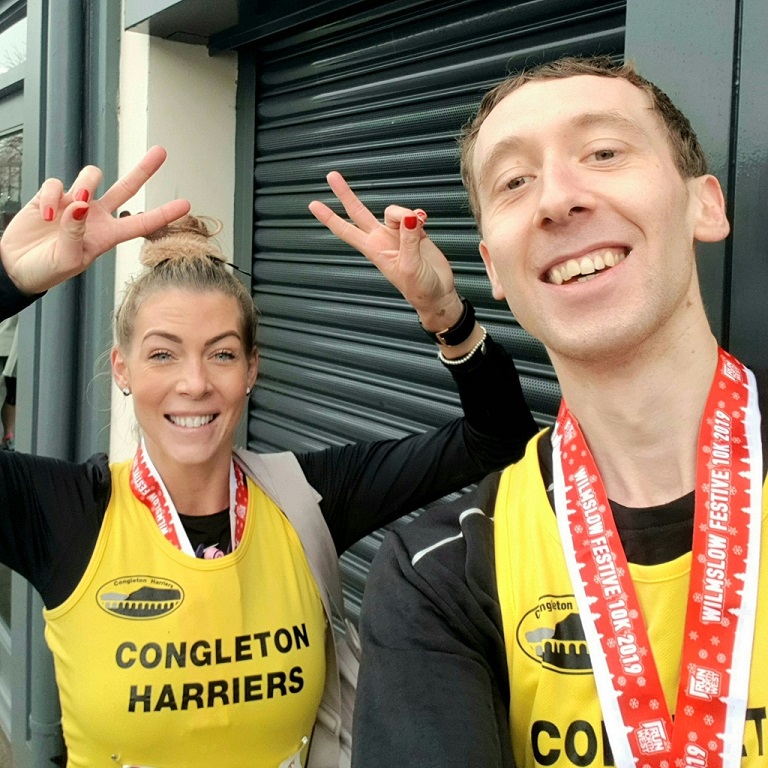 2020 was also a bit of a mixed year for me and the club. During February I picked up a knee injury which put me out of action for around 3 months. It was hard sitting at home at night recovering, instead of being at the club runs, but Mark my physio did a fantastic job of helping me with my recovery programme and got me back to running.

Once I returned to running, I got to lead some of the Tuesday evening club runs with fellow harriers & it was here I met Phil Dawson, who I found out organised the Congleton Harriers & Friends Sunday Rundays. I really enjoyed helping to lead the runs, and it really did help to build up my confidence levels.

However, due to Covid-19 & the restrictions that were put into place around April 2020, the club runs had to be cancelled with immediate effect. During this time when we could only run alone, I participated in quite a few virtual running events, which were organised by RunThrough. I participated in and enjoyed quite a few of these, and during this time, I increased my distances from 10K to half marathons (yes you read that right)

When restrictions were eased slightly, and we were allowed to run with one other person, I started to increase my distance and push my fitness to its limits. These distances ranged from 16 to 20 miles.

Fast forward to 2021 and after a long break, racing events finally returned & during August 2021 myself & Lee Mackin, along with Jason Jones represented Congleton Harriers in the Sandbach 10K. It was here that Lee encouraged me to improve my race times and achieve a new PB. 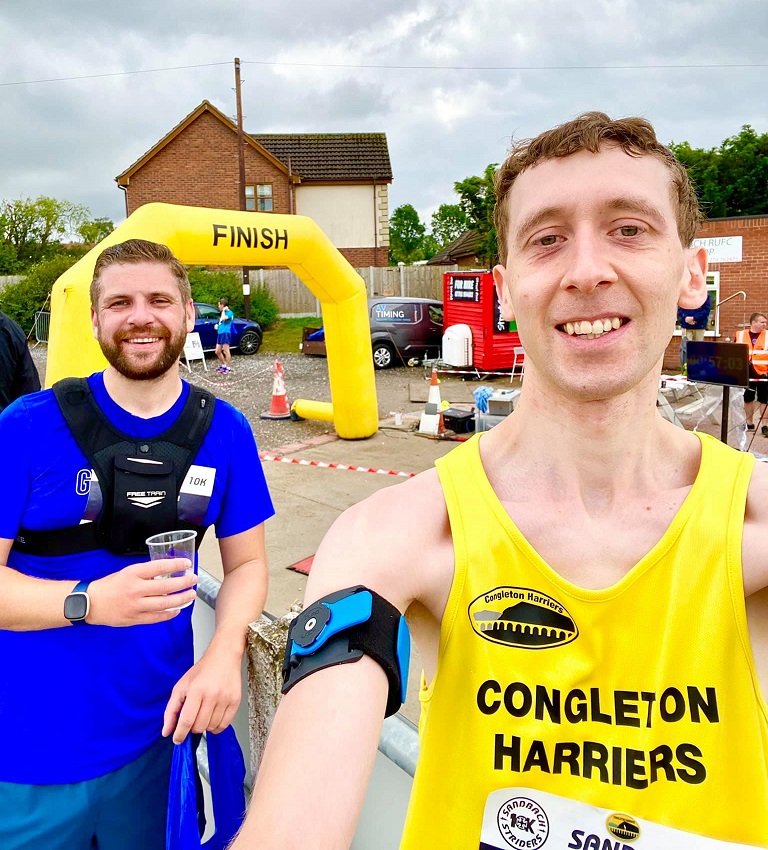 A few weeks later came the next major milestone in my running journey.....I ran a marathon (26.2 miles). I’d been inspired by the longer distance runners in the club to do this for so long, but at the time I was worried about ‘what if I can’t do it’ I remember chatting to Kelly Hurlstone and Jody Brooks about it a week before, and they both said to me ‘you’ll never know unless you try’ This was only a social marathon however, as I kept talking myself out of doing it at event level.

Next up was the Congleton Half Marathon in October which was organised by Congleton Harriers. With it being my first time running this as a club member, I was allowed to participate. The route itself was quite tough as there were a few hill gradients involved, one of these being Radnor Bank. However, the club marshalls were so supportive & encouraging.

The photo below was taken by Congleton Camera Club member and good friend Kevin Phillips as I was coming back along the home straight towards the finish line. I remember my friend and fellow harrier Georgie Budd asking me ‘why do you look so happy’ even though I was shattered haha. 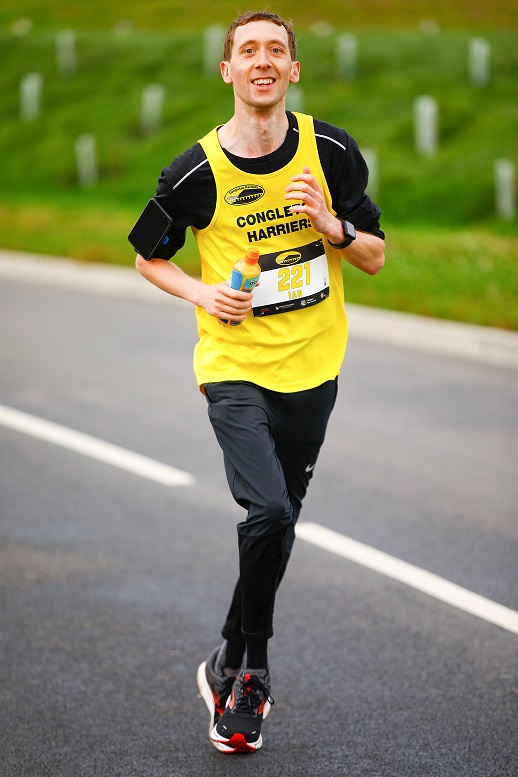 From December 2021 onwards, I decided to join Phil’s Sunday Rundays. The group is made up of a mixture of various members with or without a club, but I got to meet some great people, who are now friends for life.

I remember the first one I attended was the festive special where we started at Bidlea Dairy near Holmes Chapel. We were all dressed in xmas fancy dress (elves, snowman, santa
outfits....you get the idea) but even the passing motorists were impressed & the run had a great turnout. The photo below shows just how much fun we had. 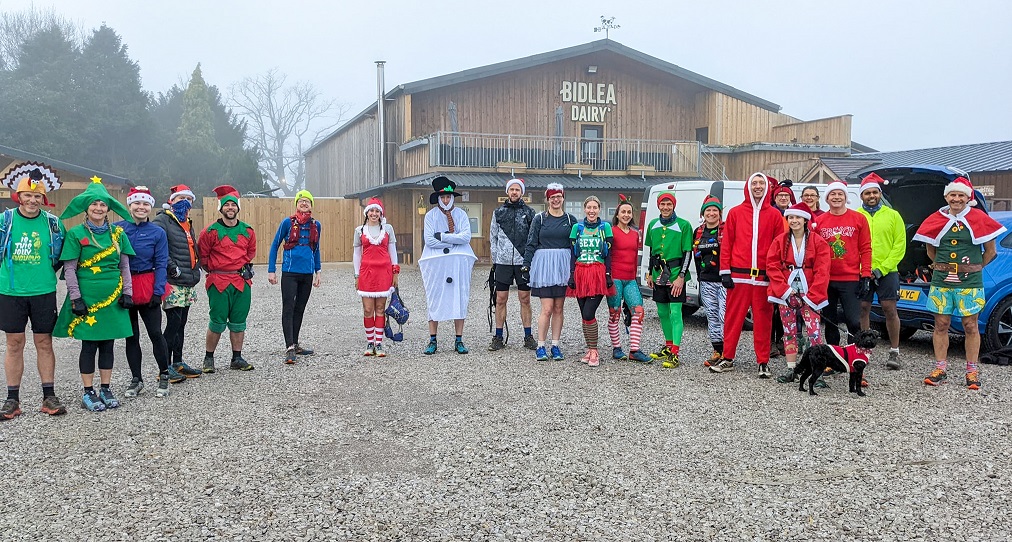 So where am I at in 2022?......I’ve started to attend a lot more of the Sunday Rundays, and have led two of these so far. I’ve also recently been asked to be the social media secretary for the club.

In March I participated in the GB Ultras ‘Race Across America’ virtual race series. My longest run which I’m really proud of whilst doing this challenge, was a 32 mile ultra-run between Congleton and White Nancy at Kerridge near Macclesfield, before returning to Congleton.

I was really inspired by Graham Cooper who regularly runs ultra-marathons, and the best advice which he taught me was ‘just enjoy the run, take your time & enjoy the surroundings’ I also started to attend the local parkrun on a Saturday morning at Astbury Mere Country Park, as I noticed on Strava many of my friends from the club running it, so thought I’d go down and give it a try.

When I’m not trying to improve my own pb time, I now help to pace my other friends from the club and give them advice on their running technique and pace, as it’s good to give something back to those who helped and supported me when I joined the club.

The photo below shows myself and Jackie Moss who I helped to pace to a 25 minute parkrun pb. 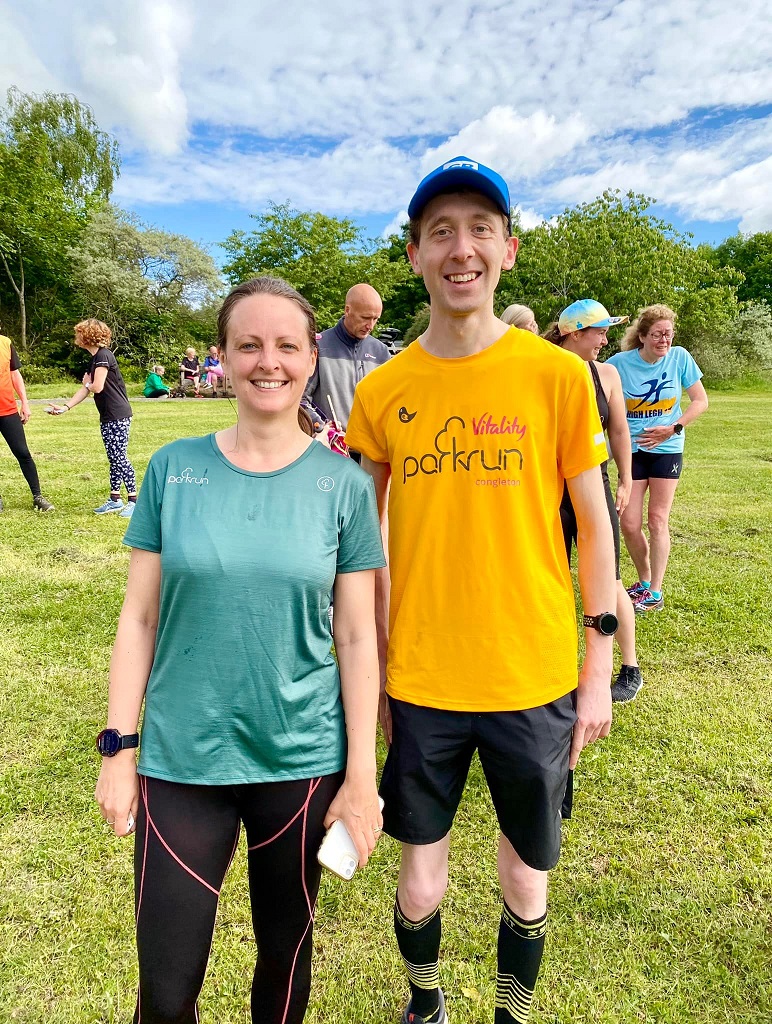 I hope you’ve found this story interesting, and hopefully will help you make your mind up about joining our club. If your new to running, then why not join our Couch 2 5K programme, where you will be coached by great friendly coaches, who will help to build up your fitness levels to those of other members in the club.

New members are also very welcome to come down and attend our Monday evening club runs, to try the club out. You will get to meet a great bunch of people who will share their
running knowledge with you.

Just remember that anything is possible if you put your mind to it. I leave you with the below group photograph from a recent parkrun where ‘teamwork makes the dream work’ 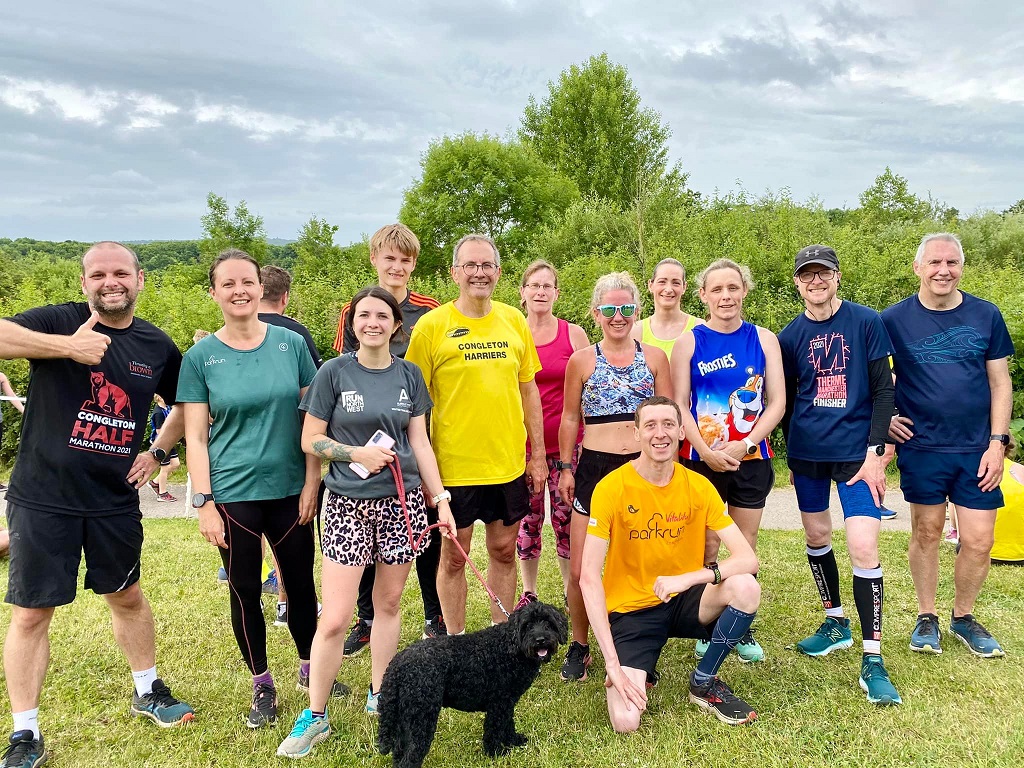