I have never been a sporty person of any kind and was usually found shying away from social activities and sports in general.  Wait isn’t that what they all say?  Well actually I think you might be right however don’t judge just yet I assure you it is the truth.  The thought of running was, well absolutely absurd to me, why would anyone do that?

Never the less near post COVID one year ago to the day (8th June 2021) I became a "runner" I embarked on my first “Club Run” and remember the conversation well:

I didn’t die on run and the world never ended however, I had never felt so exhausted in all manners of the meaning.  I obviously didn’t know where I live, as if Harry Potter himself cast a spell and from that moment a whole new world of side streets, roads and crossings were made accessible to me.  I still have no idea where we ran, those that know I have a terrible sense of direction, is an understatement.

Did I feel good afterwards, you bet I did.  Was I scared?  Hell yeah, I hadn’t been in contact with anyone since pre COVID even longer in a sporting and social environment.  What can I tell you at the time is I kept going through fear of getting lost and sheer willpower!

I was the rear runner who kept running through the support and encouragement of my fellow runners, who appeared to me more like professionals that possessed amazing abilities to run and make it look easy.  As I started to improve so did my sense of proudness, I wanted to run well and be like my fellow peers who I am very fond of to this day.

Fit-Bit was the watch that helped get me going however I did upgrade to the Garmin 235 which I found to be an amazing watch as met my needs at the same time introducing me to Strava another tool I now can’t live without, handing out Kudos like its candy.

Skipping ahead I was caught up in the moment mid-October, a little peer pressure saw me Affiliate supporting the team through NSCCL XC League.  This was an experience in itself and one I thank Nic and Shannon for very much, without the push I may not have committed, moments that will stay with me forever. I wore my colours with pride and with very few goals:

I have since competed in a number of events including 2 Half Marathons all this within my first year and am pleased to hear that the NSCCL will be sticking around long enough for me to revisit my experience.

The following photograph is from the NSCCL event on 16th October 2021 my first ever competitive run of any kind.  Little did I know at the time also featured the Chairman of Congleton Harriers Nick Budd and the Treasurer Polly Kennerley, a Club I later went onto join in January. 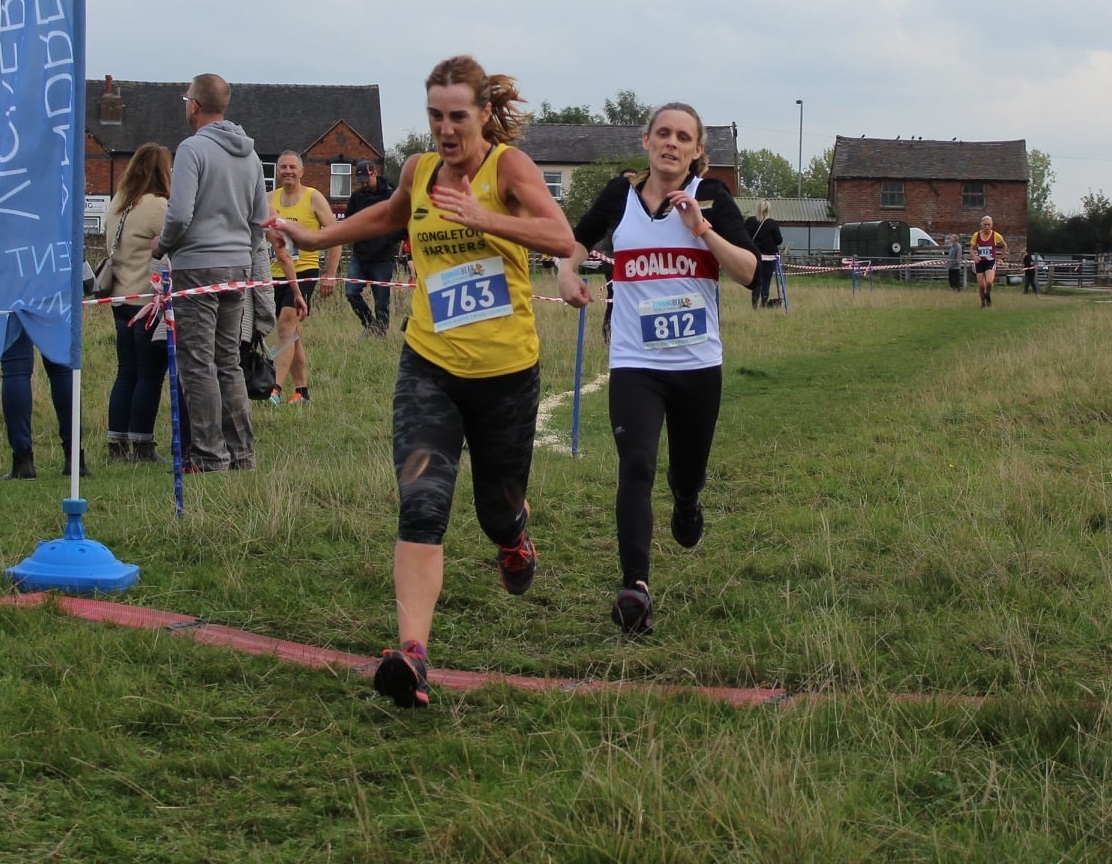 Come on so what did I get I hear you ask?

It really doesn’t matter honest, I wasn’t running to a pace I was just running and having an amazing time, my fellow Club mates were cheering me on and it felt amazing.  I will tell you I bagged my Club some points which would go on to make all the difference later in the league.

I had recently discovered a group called “Congleton Harriers and Friends Sunday Rundays”, often hosted by the Harriers own “Phil Dawson” and often had attendees with and without Clubs from all over.

I started to attend these to up my game so to speak, the miles were nice with plenty of breaks, I got to meet new people some of which I now consider good friends, shortly after I joined as a Harriers Social Member/Second claim.

It was around this time in December that I really wanted to improve being the compulsive perfectionist that I am.  I attended some Strength and Condition classes which just so happened so did some other runners from Congleton Harriers.  I was once told I was moonlighting across Cheshire East.

Running with Boalloy, Congleton Harriers and on one occasion Running Bear all in the same week I can see why they thought that.  What can I say, I really enjoyed spending time with everyone from these Clubs.  I was not judged, singled out, shouted at or name called but was often greeted with a friendly dose of enthusiasm and uplifting smile.  I had somehow forgot all about the nasties of the world and found general kindness, nice people who I’m sure all have a story to tell with many ups, downs and hardships of the like.  Here I was Emily a casual runner passing the time enjoying the company of many without prejudice.

January came with a dose of COVID which stopped me in my tracks.  This was just prior to the Cloud 9 Recce Sunday Run-day, was gutted as I had entered the race not really knowing just how hard the Cloud was and wanted to check it out.  January also came with a dose of sadness for me as I made the move from Boalloy to run in the yellow vest.

Why did I move?  I think honestly, I gave in to my own negative thoughts and frustrations at the time.  Do I regret it?  A little, I should of spoke to my team more but this was not something I was accustomed to and felt a life skill I missed.

Do I like my new Club?  You bet, this club has so much to offer all kinds of runners from new to old and I find myself getting more involved as my confidence grows.

Where am I now?

I have just finished the NSRRA’s Westbridge 5 with a PB of 36.17, first in my Age Group and NSRRA category “M” and am currently looking towards the Staffordshire Moorland’s Summer Series on Thursday (9th June 2022) The following photography is from the Stone Master Marathoners event courtesy of Bryan Dale. 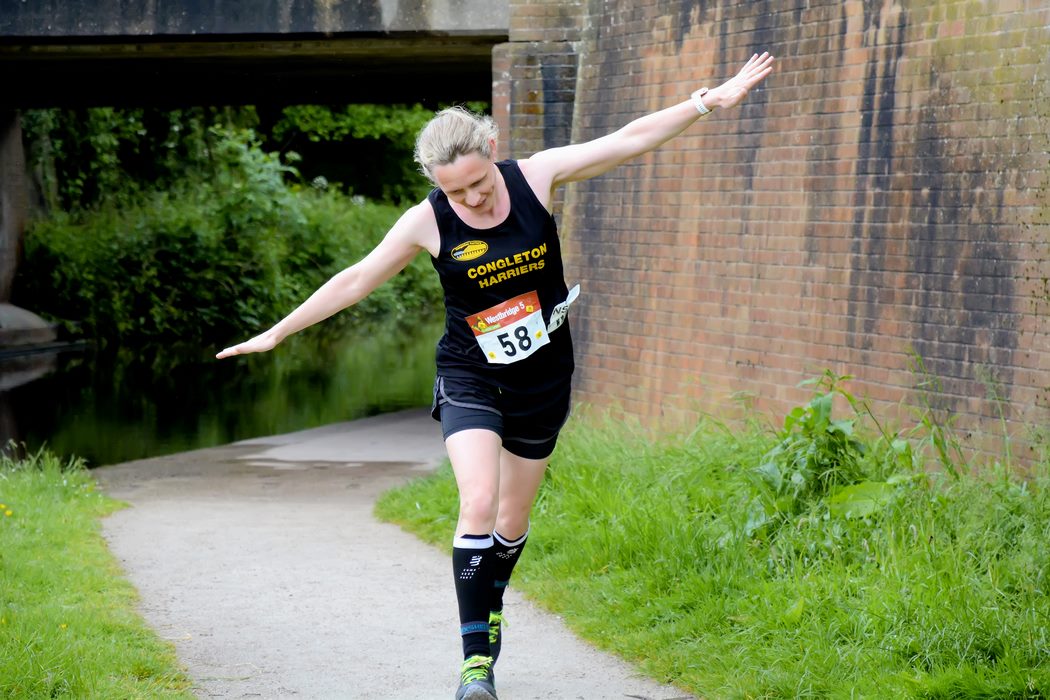 Firstly, thank you ever so much for taking your time to read my dribble, I can only hope you had one or two smiles along the way.  Yes, I really achieved a lot in my first year starting with the confidence to meet new people and get my kit on, hard to believe isn’t it.

If you are thinking of joining please do, it may well be the best thing you ever did,  if your new to running altogether why not check out our Couch 2 5K programme which have an amazing supportive team to build you up to others of similar ability.

I am just one of many members who wish you good luck in finding your story.

I leave you with the following two recent team photographs from the Marathon Relay last month (May 2022).  We are all wearing yellow, have similar goals or escapisms.  Be kind and think us not I. 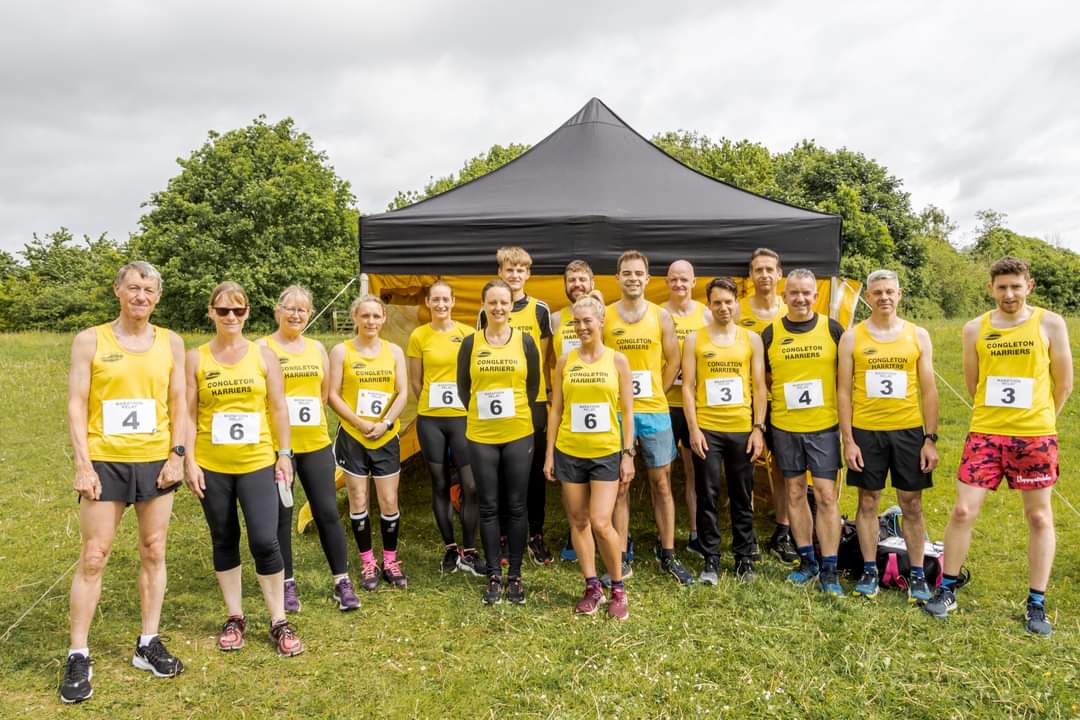 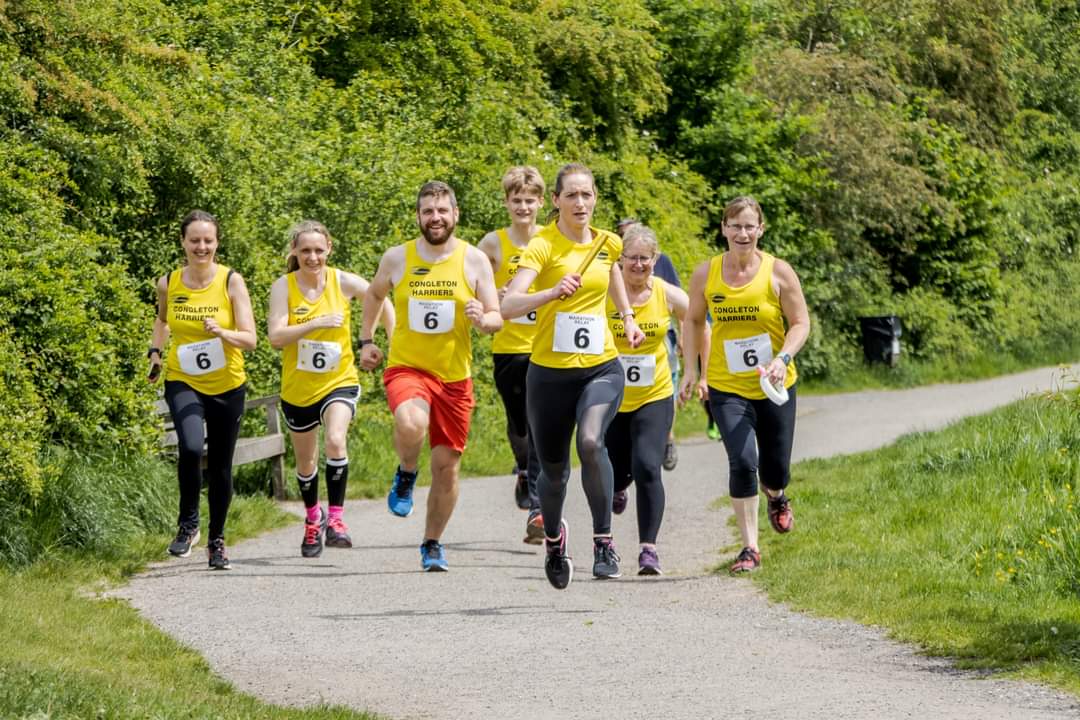